After spending most of the day underway, everyone was relieved when we arrived at Cumberland Island at 1800. Progress was slow but steady as we sailed past hundreds, if not thousands, of cannonball jellyfish. We did not catch any fish today, but we did catch a bunch of those. When we picked them up they left brown stuff in our hands which was kind of sketchy, but turned out fine. It was a normal, sunny day in general. Jake was the watch officer in the morning and Thane got us started on The Alchemist. Jake passed the title of Junior Watch Officer (JWO) onto Julia, who did a great job in the afternoon. Katie went the whole day as galley assistant with only one accident! There was a mishap with the nachos at lunch when the wind and waves picked up a bit. For Thane’s class we discussed the election and learned further about the electoral college. Everyone here is on the edge of their seats about the outcome of the election. As afternoon turned to late afternoon, Julia passed the JWO hat to Ollie and B watch took the deck. Since (in my opinion) B watch is the best watch, we took in sails and got the boat anchored. The striking of the mainsail was choppy, but we moved passed that and nailed the foresail, jumbo, and especially the jib. At anchor we had an all hands dinner and got treated to a viewing of Moana, courtesy of Holly and Tiffany. The students and some of the crew gathered with their sleeping bags, which was nice. I am excited to get going to shore tomorrow and exploring Cumberland Island! 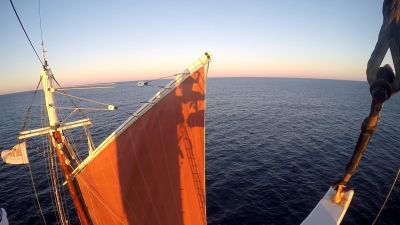