Today was the second deckhand rotation of the voyage. Now I am under Mr. Terry’s, Morgan’s, and Charlotte’s commands. I really like all of them and am excited to go on the long underway part of the voyage with them. During muster, this morning we had a couple of interesting announcements. Since we are going to be staying in Charleston for a few days, and now the student body has a bit more trust and responsibilities, each day one of the watches will spend time working on ship maintenance jobs. Today it was C watch and they had to clean the whole deck. Tomorrow it is my watches and we’ll probably be working on the cabin top, which sounds fun. The other announcement is that we’ll be playing “Murder at Sea” in the spirit of Halloween. We all get to pick characters to play but I have yet to choose mine. After lunch I got to work on my ditty bag and I finally finished it. I’m really happy with the result and depending on my schedule I might do a second one. I wanted to try a cinching device I designed but could not use on this one. I almost forgot to mention one of the funniest moments in the voyage so far. During breakfast Morgan managed to catch a whole egg-cupcake after throwing it in the air. I asked to recreate the moment for a photo op and when he was about to do it Katie slapped the egg out of his hand, and it splattered flat on the deck. In the moment we all were caught up in laughter. We don’t like to waste food, so Morgan ended up eating it anyway, which was the polaroid I got for the day. We finished the day watching Hocus Pocus, which is a favorite of mine and I high suggest it, especially during this time of the year. 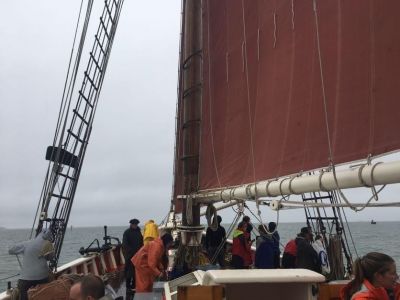