Our day began at night, under the lights of Provincetown Harbor, with the bioluminescence blinking green up at us from the water below. Squid flitted by the hull and the great, heaving back of a whale was seen shifting against the black sparkling water as we enjoyed delicious brownies, made hilarious jokes through the time old method of signal flags and assured our vessel was safe until the morning.


The entire Common Ground student body rose promptly and were ready to decimate the “I’m a star’s” that begin every morning’s routine. We fought to raise the sails, and they fought back. In the end we were smarter than the rope, and with a fair wind, we tacked about and set out for whales. But before we could see any we had to complete morning chores, which were dealt with handily by the students who now seemed old salts at the trade.

We enjoyed a breakfast of sausage, egg and oatmeal and were ready for the beasts. We saw a lot of whales! Once again the whales playfully and curiously approached within one boat length of the ship, delighting some of the students as they saw them from aloft, having climbed the rig! Every one of us got aloft, some of us working through tremendous fear of heights and the unsettling roll of the ship. It was funnnnn.

While the wind died down from its initial ferocity, it picked up again after lunch, once we had set a course for Boston. The crew deftly handled sail and kept us safe as the rest of the watches continued to climb the rig, or learn about ocean life and environments, an interest for the subject having been sparked by our massive, baleen friends. We dropped sail and the hook just at the start of the Boston Harbor islands, and just in time for a scrumptious dinner of chicken parmesan and sweet watermelon.

After dinner we got to see a double rainbow in the sky, and finished our chores under the setting sun. As we finish this log, we are happy for the experiences we had aboard the Roseway, even when we were first reluctant to do something, and will be sad to leave her. 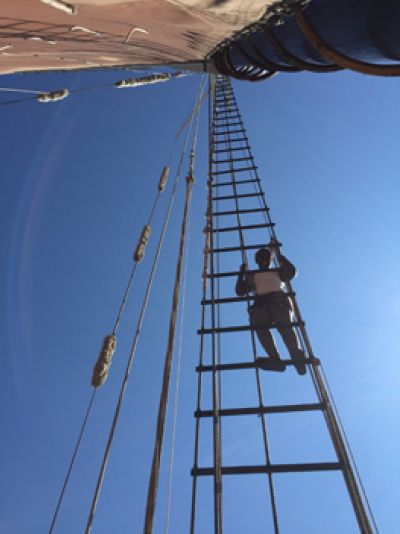 As we finish this log, we are happy for the experiences we had aboard the Roseway, even when we were first reluctant to do something, and will be sad to leave her.