Today, Luther’s students were able to have an extra half – hour of sleep, we mustered and spat our sick rhymes (our anchor-watch raps). After a class discussion about female pirates and gender identification in the 1800’s, we explored the sea turtle sanctuary. The sea turtles were numerous and spectacular, they were majestic to look at, students were able to swim right next to the creatures to get a good look. Other examples of sea life seen include a sea cucumber, sea stars, squid, sea eggs, a shrimp, an Indigo Hamlet, a flounder, a stingray, and an eagle ray. After arriving back on the Roseway, a delicious lunch of chili and cornbread was enjoyed before. We weighed anchor and set off for the thriving metropolis of Culebra. Students explored the city, enjoying the Latin Caribbean music, bright colored buildings and murals, access to a post office to send letters home, and the nearby beach. The beach was over a mile long stretch of fine sand, beautiful blue waters, and an abundance of pelicans. There were two old army tanks parked permanently in the vicinity of the beach, decorated in the bright colors common on the island. Upon arriving back on the boat, sunburn patterns were exchanged and admired while Dani prepared a sumptuous lasagna for dinner. 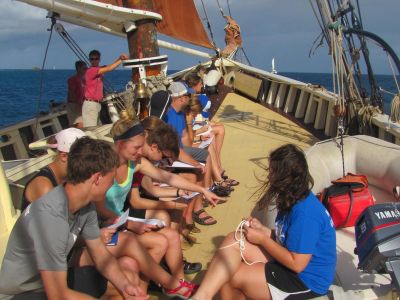