Dialogues performed by anchor watches in am before breakfast. After breakfast, we sailed from Virgin Gorda to Norman Island, the island that inspired Robert Louis Stevenson to write Treasure Island. After anchoring, Luther and Roseway crew hiked to the top of Spyglass Hill, a famed pirate lookout. Luther buried a time capsule for next year’s student crew. The trip took approximately three hours roundtrip. After the hike, students and crew swam off the starboard bow. Luther then treated Roseway crew to dinner at Willy T’s.

Anchor watches performed nautical covers of popular songs at roughly 07:30, just prior to breakfast. After breakfast, crew raised anchor and all went snorkeling at Indian Caves, where various individulas spotted eels, rays, turtles, and underwater tunnels. After snorkeling, Roseway power sailed to Cruz Bay, Saint John. Perhaps most importantly, Luther students and prof discussed the contrast between youth and old age as it relates to Joseph Conrad’s Youth. Luther and crew checked in with customs and then explored the near vicinity throughout the afternoon. Several Luther students went for a hike, perused the souvenir shops and enjoyed the beach. Various personnel received life lessons from Thomas the smoothie drink specialist. All returned to Roseway at 17:00 to raise anchor and motor to Cinnamon Bay for supper and chores. Makeda learned that the Roseway does not, in fact, have a poop deck on board. All had their fingers crossed for a leisurely night dip in the sea. 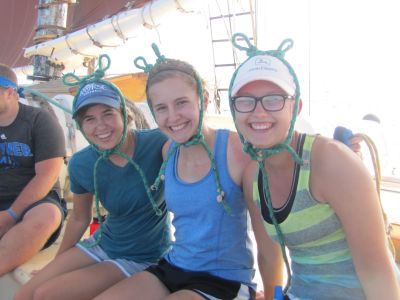