Roseway and Crew slipped our mooring lines just as the sun peeked over the eastern side of the island. We shook the reef to set the main in its full glory. Rumbling along through the channel we set the four lowers and as soon as we passed the G1 buoy, Captain Wells killed the engine and we were off at 9 knots in 3-4 foot swells.

At this speed, we estimated that we would reach St. John by the early afternoon. Port Watch (Rob, Cat, Sienna, and Kevin) took the deck for the first three hours of the voyage. The brisk northeasterly breeze sent us bombing across the waves. My watch, Starboard Watch, worked on our coastal pilotage, taking three bearing fixes and plotting points, figuring out how long it would take for us to get to Pillsbury Sound (the trafficky stretch of water between St. Thomas and St. John). Among the new navigation skills we learned, we also found that looking down at small numbers and tick marks on a chart will, in fact, exacerbate sea sickness. Still, we persisted and marked our way along the 35 nm stretch.

At 1100, Starboard Watch took the deck as we corrected our course to steer around the western end of St. John. We were introduced to the jobs of forward lookout, helm, and standby/boat check. Our next obstacle was Windward Passage, a narrow stretch of water that consistently funnels wind from the Northeast. Most sailing boats, for lack of skill or confidence in their abilities, choose to motor through Windward Passage. No matter, Roseway and her crew short-tacked their way flawlessly between and around islands.

After seven(?) tacks we headed in towards our anchorage in Francis Bay, with just enough time to go in for a quick snorkel. I went with Rob and Sienna, and we ran down the beach to maximize time in the water. After some sparse, grassy sand, Rob pointed out a huge green turtle munching on the grass with a Remora resting on the back of its shell. I thought to myself, if I don’t see anything else today, I will be entirely satisfied with my snorkel. But, by the graces of Poseidon, two more, larger turtles, one with a small Remora, and one with TWO, count them, TWO Remoras. Rob tells me that Remoras are like hitchhikers, and eat bits of food left over after the turtle eats. Kevin tells me that this type of relationship is called commensalism, one where one organism benefits (the Remora) and the other does not benefit or is harmed by the partnership (the turtle). 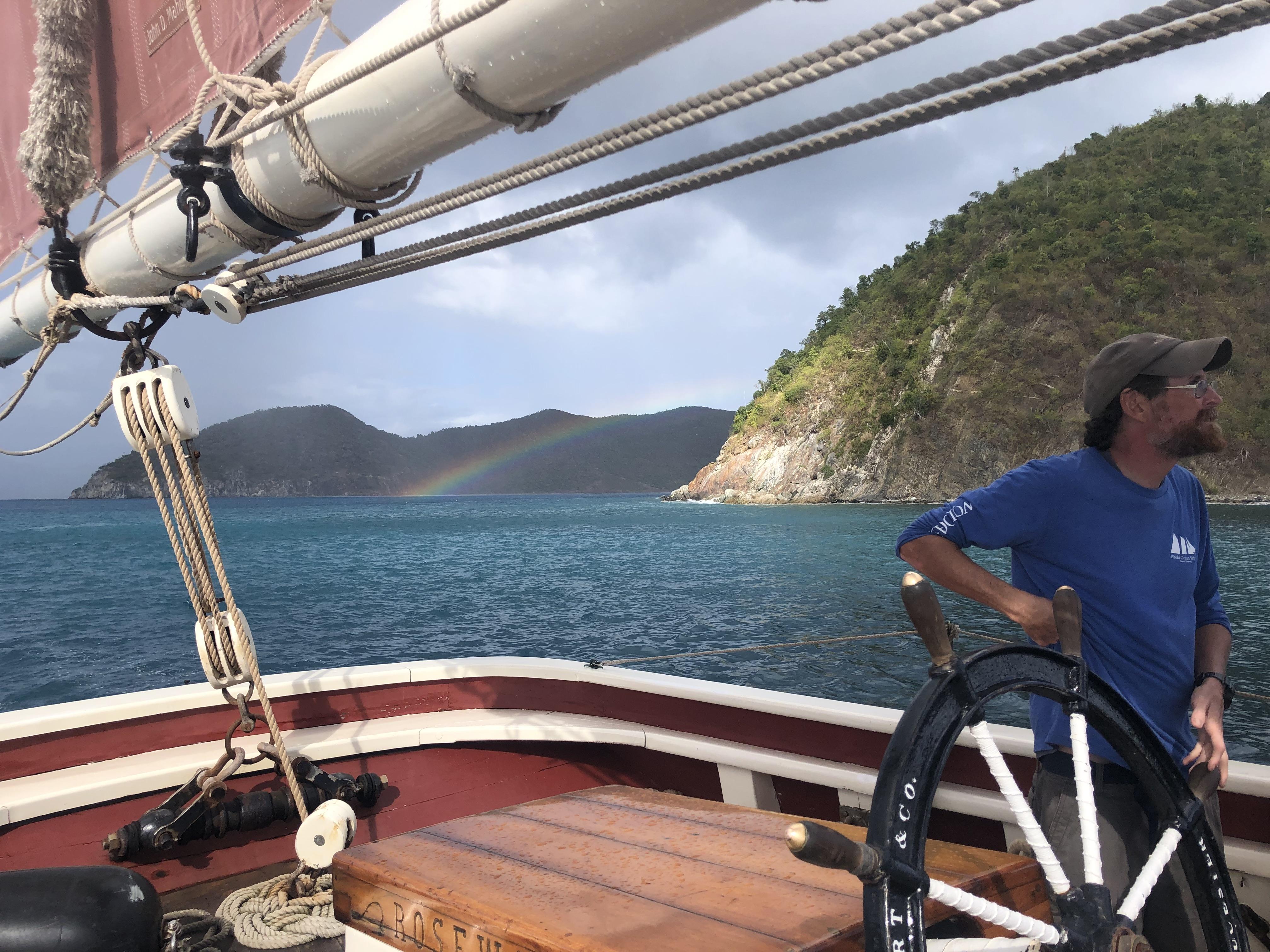 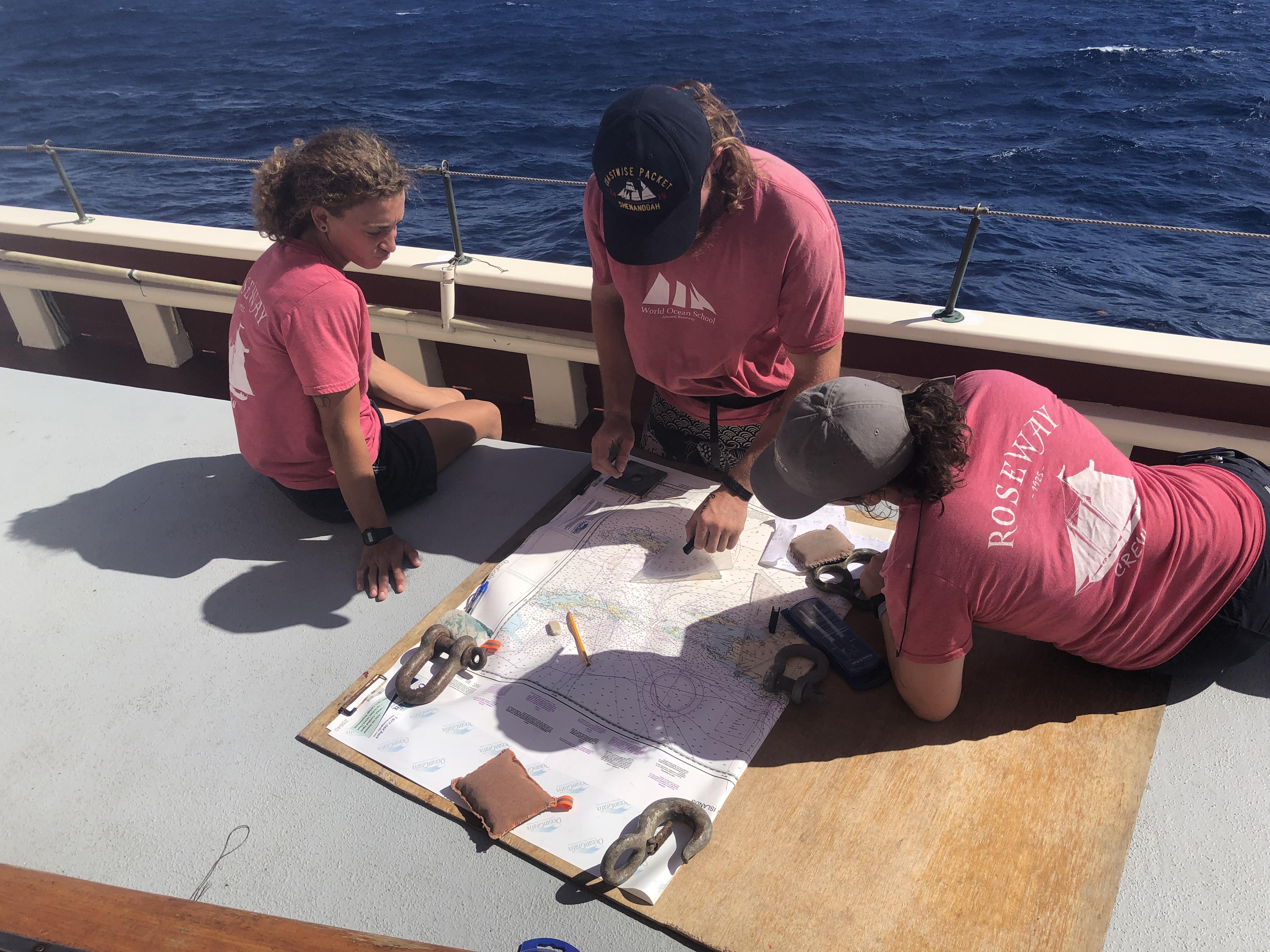 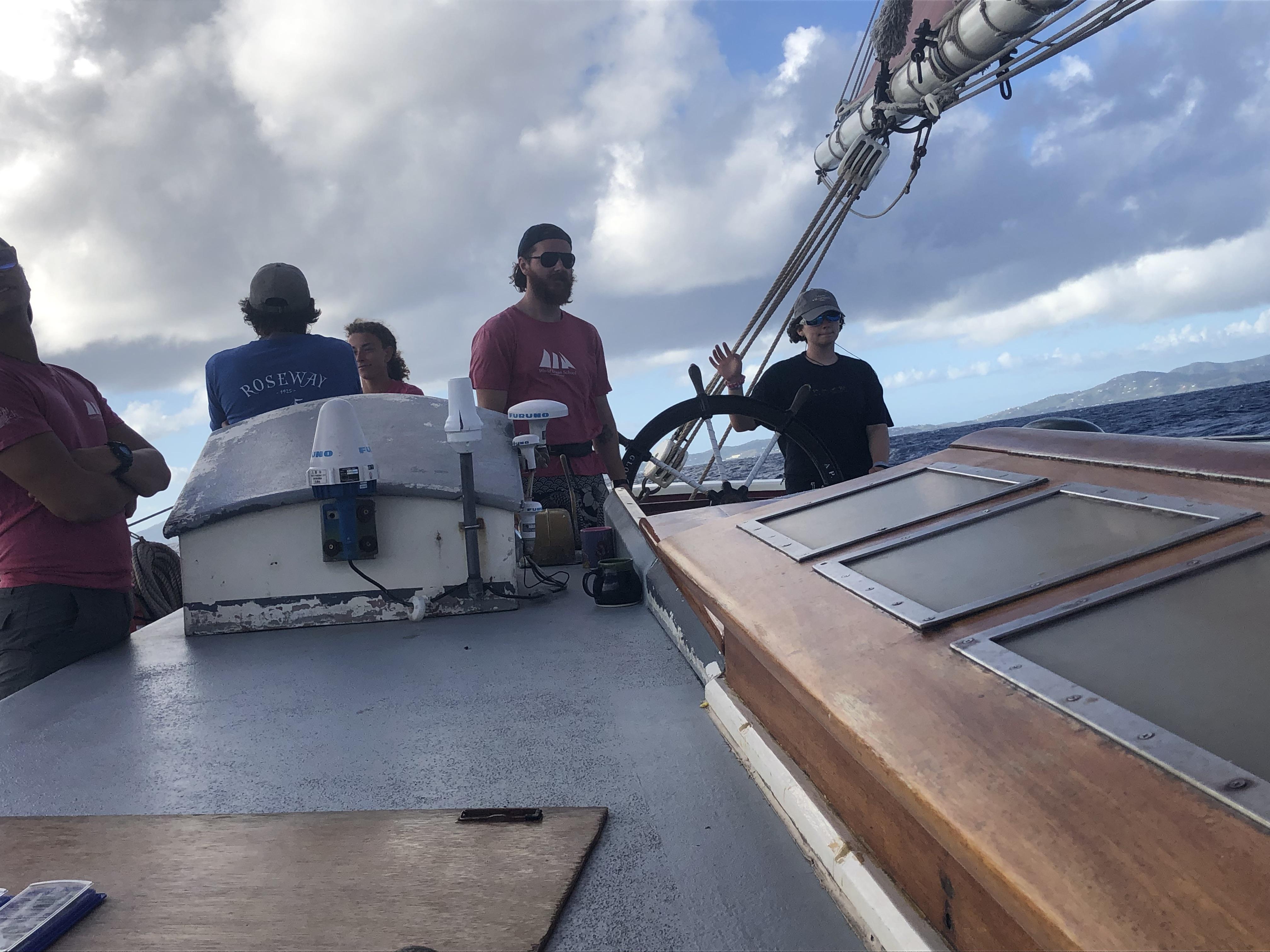 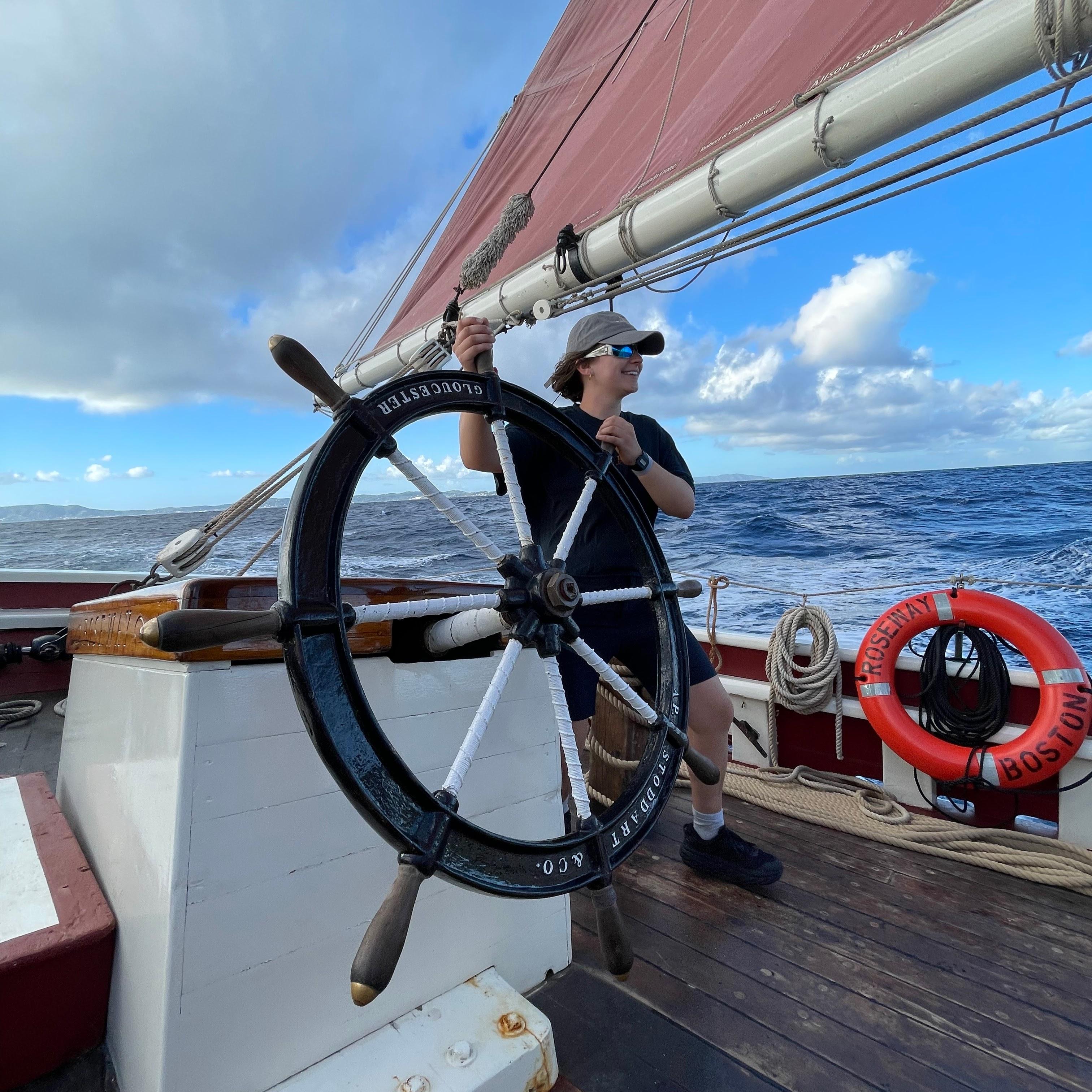 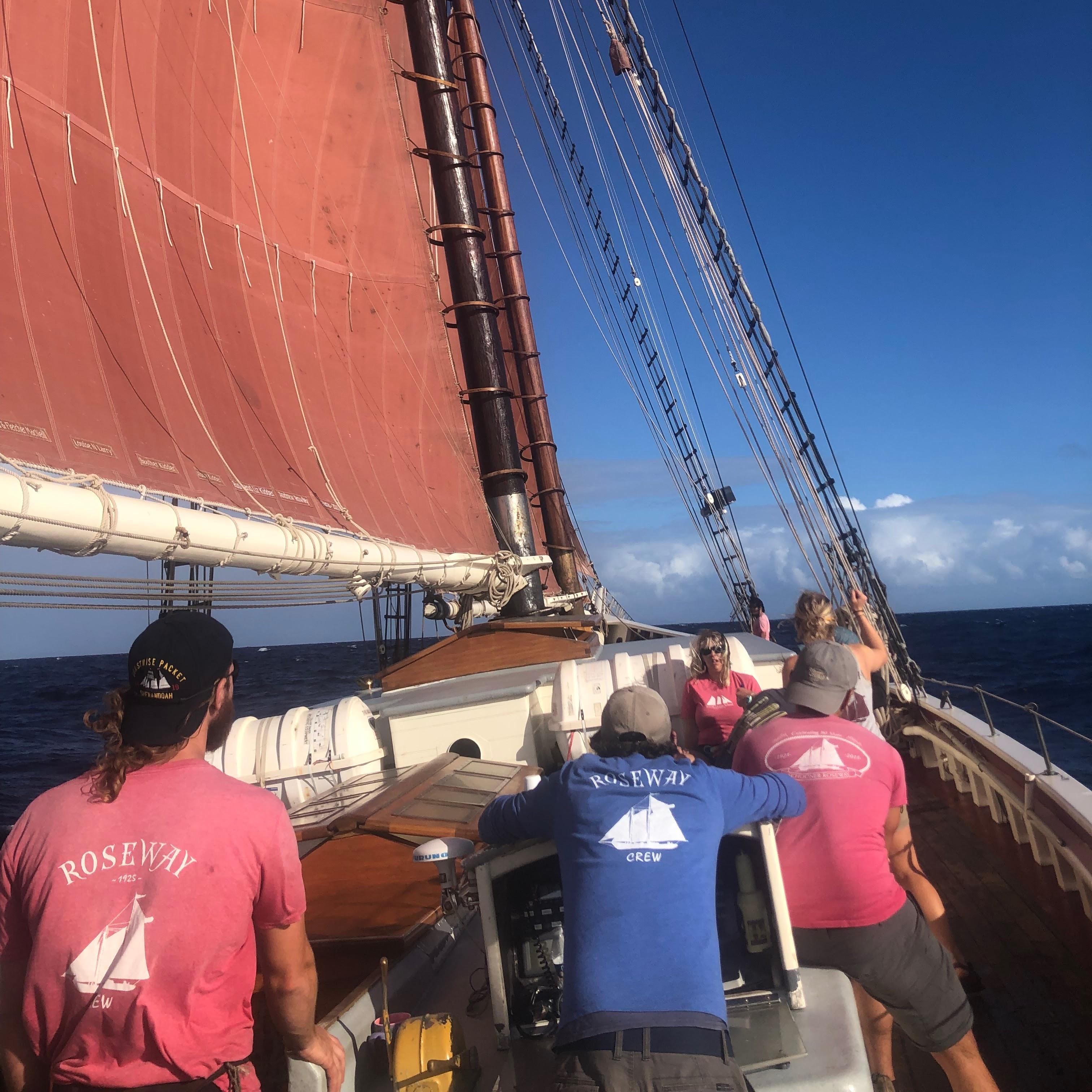 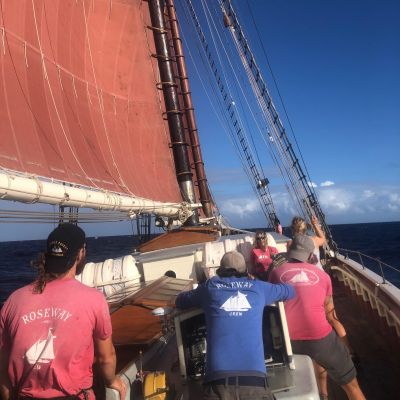