Off the coast of North Carolina

What a day! Who would have thought that waking up at 4 in the morning would lead to one of the most hectic watches we will have (“knock on wood”). I actually woke up at 0230 because I couldn’t sleep. This was a result of the pummeling that we were receiving from the waves off the coast of North Carolina. Shout out! I walked on deck in my full foulies to see the majority of A-Watch huddled midships on the high side. Each of them were relatively wet except a select few who were drenched (Ian, Zach, and George). I looked forward and saw the source of my temporary insomnia. The bow of Roseway was plummeting into the oncoming waves, shooting up a wall of water on either side of the bow. I thought to myself, “this is gonna be a fun watch.”

After watch and a yummy homemade granola breakfast, I dozed off for a few hours. History class came around post-nap at 1100 followed by another delicious meal of loaded baked potatoes. Later that day Foster pulled in a good sized tuna that we filleted as a group. The rest of the day was general routine with an almanac at 1700 where we talked about the Dixon Ticonderoga, the flagship of pencils. After another vivid sunset we all either headed for bed or prepared for watch. Again, what a day! 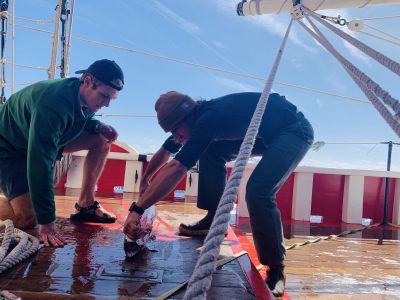