The middle of the road.  Here we are.  As I sit in a Laundromat awaiting my turn to attempt to rid my clothes of their rancid odors, I look out at all nineteen of my shipmates and smile.  Again, we find ourselves in a somewhat puzzling situation, but like so many others, it parades along, flawlessly unforgettable. Even with four and a half weeks left together, the imminence of our journey home lingers ominously on our temporal horizons as a discouraging afterthought.

I could sulk endlessly, holding a dismal perspective on the remainder of our voyage due to our lack of time together, but I see that as no option. Rather, I will contemplate on the positivity that has wholly altered my outlook on life.

The most absolute and profound realization that I have come to I wholeheartedly dignify in my own hubris.  The fact is that I never would have even considered having a conversation with at least two-thirds of my shipmates, but I feel that I’ve come to a point where I know some of them better than my own best friend.  What a privilege.

I won’t elaborate too much on the day’s events because it has become a redundancy adapted by the rest of my shipmates, but without further stalling, here is the rundown: we woke up, cleaned the ship as we always do in port, and then ate a breakfast of quiche.  We continued on to an art museum and a glass blowing demonstration, followed by lunch.  Finally, we ventured deep into Norfolk to the Laundromat where we find ourselves now.  Once again I gaze upon those that I have learned to love and respect.  I smile and look down at this page.  I laugh as Renny and Graham appear in the doorway with cornrows.  I finally sit back, ready to suck the marrow out of every moment that I have left to spend with my family. 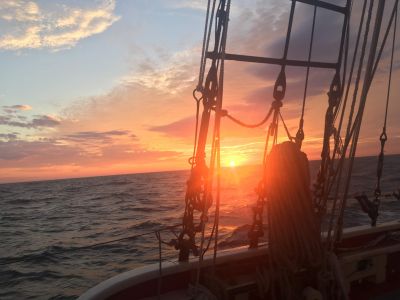