“It was an early morning in September and all of my sanity had been spent. I had been awoken for a boat watch, so to the engine room I went. With careful eyes I kept myself from botch.”

This was a bit of an improvised song that I did to a similar theme of Paddy Lay Back. Though back to the story…

This took place early morning. At about 0015 we were, trying to gain our bearings by triangulating our position. Then on the second marker it happened. The fog was first over the markers then gradually became thicker and closer. When staring afar from fog, it’s almost like looking at land that moves. It is a massive clump that elegantly floats across the sea and land. Though as it moves closer you don’t notice. When it is arriving or leaving, your vision clears or worsens. That is truly when it becomes apparent. When in the fog once you make it past the fact of the danger of lack of vision, it turns into almost a magic show. Today was a warm magic show. Boats appeared and vanished. Jellyfish were the only creatures that were constant. Then like a curtain pulling back, a group of leatherback sea turtles came to the surface. Looking at these sea creatures was a joy I can’t describe. That’s why I like the fog. It has this magic to it to reveal what it wants. When it does though, you never know what you’re going to see. Whether that’s a good thing is to be determined. Just one part of this long adventure.

*Note: Photos will be uploaded shortly! 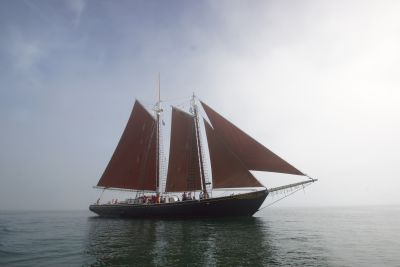