September 24, 2017: Today was our first full day of sailing aboard the Roseway, as well as our first taste of what a full 6-hour-watch feels like. The day started off with an amazing breakfast consisting of potatoes and bagels cooked by Brian. A-Watch didn’t have watch until 1300, so we had time to take in the beautiful view on deck or sleep in our bunks. I spent most of this time on deck relaxing with my fellow shipmates. A-Watch ate minestrone for lunch at 1230, we ate first since we were the oncoming watch. I began with being at the bow then later moved to the helm once we got into the Cape Cod Canal. Everyone on land was waving and taking pictures of us, even all of the other boats were waving. It took us about an hour and a half to make it through the canal, we continued to sail past Duxbury and eventually Martha’s Vineyard. On my second rotation at the helm there was a beautiful sunset behind us that had everyone’s attention. After the sun had fully set, A-Watch finally had a Mexican-style dinner which was amazing. After dinner we saw jellyfish and a squid off the port side of the ship, and then we were called into the salon for an excellent presentation by Ali and Matthew about Falmouth which is the port we will be visiting tomorrow. Once that was done we were free to begin settling into our bunks. 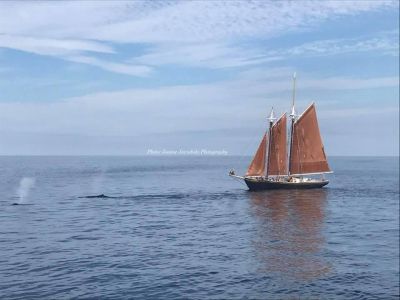