Today, we woke up and went straight to work. Hauling up sails and coiling lots of line. Teddy did his first balentine coil. Then we had breakfast. Nutella was had. Lots of Nutella. This is the beginning of a day with epic proportions. Everyone had supremely loooooong watches.

For the next rotation, we started to encounter the whales. Then, the A Group put on harnesses and ventured off the bow spread while the b and C groups crowded to the edges. It first started with a couple of whales exhaling and ended in Ry-Ry shedding a few manly tears. We first approached them trying to get a better look and then one come up right beneath the bow spread which gave most of group A a heart attack.

A couple of selfies may have been taken by Kira and many others were actually taken of the whales. While group A was sitting on the bow spread, they started coming up with AMAZING names for the reappearing whales. Some of those names were like Tiger, Shark-Whale, Lazy, Pearl, Distant, Near, Friendly, Spout, and of course OJI! (which means grandpa in Japanese AKA Ry Ry) Group A practiced for the Deck Hand Olympics with competitive knot races. And we finished the epic day with swimming in the nice, 78 degree, warm water at P-town. And we look forward to the new adventures that tomorrow will bring. 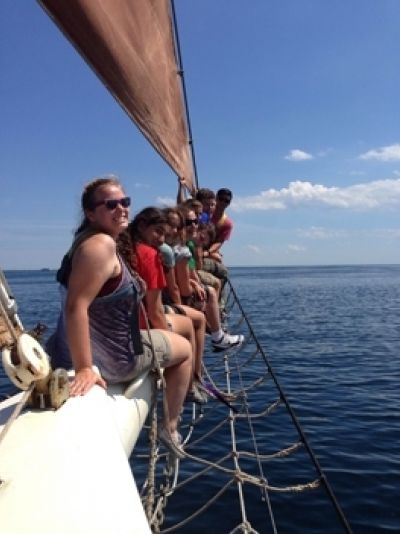 Some of the whale's names were like Tiger, Shark-Whale, Lazy, Pearl, Distant, Near, Friendly, Spout, and of course OJI!